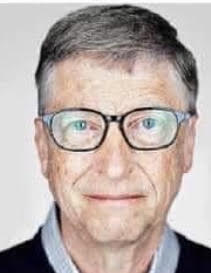 Like Bill Gates I Will Be Successful Says 10 Year Old: Her Name & Photo not included in this post as per her request. She’s from VIP’s International School. That’s not an offense rather Millions of kids like her are ready to do wonders, when they grow up. But, the Virus is mutating and things are beyond the world to be back to normal.

Family Story Involves a 10 Year Old, Who says: Like Bill Gates I Will Be Successful. And More Interestingly She Is Confident Of Achieving Huge Success Whilst The Pandemic Still Deadly.

Here’s all fun to read as a 10 year old says: Like Bill Gates I will be Successful but to help the people around the world.

I asked her what you would like to become, rather clearly to her, I repeated my words to make her understand better. She’s a great fan of Bill Gates. “I want to be like him, who can’t even count, if all his earned money put in front of him”. She said.

Shocking: Hadook – Interesting eBooks for all – READ FREE at – In Hand Writer

She shocked me when I told her, Bill Gates is too much, she’s asking to become like. Her shocking reply as it impressed me is: “There’s nothing impossible and I’m a YouTuber alongside studying well. I’m doing all that I can”.

Yes, indeed her YouTube channel is “AngiePlays Roblox”. She’s connected with her viewers, twice a week or twice a month. And of course she’s creative and innovative too, with a loud, clear and beautiful voice. Her videos are worth watching and the best of her yet to come. She’s growing and has a mission to accomplish. The mission is to eliminate poverty from the world. Do subscribe to her YouTube channel