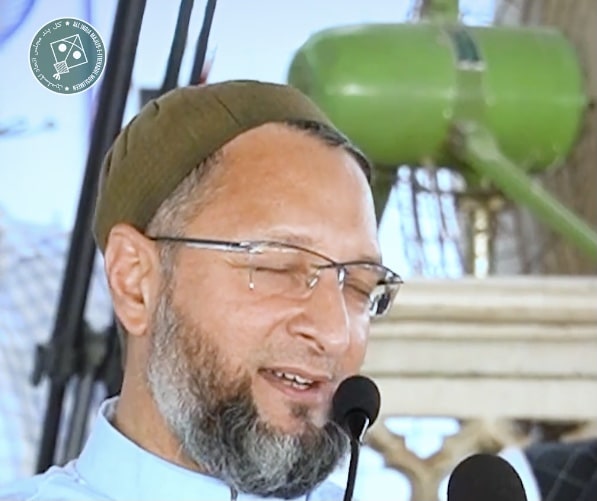 Asaduddin Owaisi Claims Muslims in India Are Citizens Not On “Rent”

Asaduddin Owaisi Claims Muslims in India Are Citizens Not On “Rent”. Means Muslims are a part of India, not on temporary stay, as this puts opposition to either boost their vote-bank on religious basis, or change their strategy.

AIMIM President Asaduddin Owaisi claims Muslims in India are Citizens and are not what opposition thinks about. He accused the opposition, while saying Muslims in India are a part of India and not on rental basis. “Hum Kiraidaar Nahi hum hissedaar hai is mulk ke. Jab tak samvidhan zinda hai, hume is mulk se koi nahi nikal sakta”. He means, Muslims are living in India not on temporary basis, and they’re a part of India. As long as constitution is alive or protected, nobody from the opposition can kick Muslims out from India.

Fighting a tough battle for the Uttar Pradesh election, contesting 100 candidates, Owaisi speaks in favor of Muslims. He’s more aggressive to speak openly while challenging his own vote bank for his party AIMIM. He thinks his mission might be accomplished whatever it might turn out to be.

But since he wants all the Muslim votes in Uttar Pradesh to go towards AIMIM, then it looks, something shocking to happen again. Either like what happened in Bihar or what happened in Bengal. However, Yogi Adityanath’s criticism since couple of years for his very bad leadership, brings anger in the confused minds of people in UP time and again. BJP can or will take Owaisi in a way to create Uttar Pradesh elections as religion based. And this will be troublesome and worst scenario again if BJP regains power in UP (Uttar Pradesh) on the basis of religion.

Voters in Uttar Pradesh need to understand what’s worthy and what’s not.

How We Report Posts Like Asaduddin Owaisi Claims Muslims In India…, Etc.