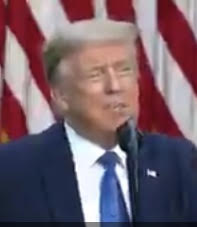 United States President Donald Trump says he will win anyway even though US media accuses him in many ways. Mr. Trump called Fox News as weird to watch and insulted again Joe Biden at the end as “sleepy Joe”. “So weird to watch Fox News interviewing only failed democrats. Dems, like Representative Tim Ryan of Ohio, who got zero percent in his recent Presidential run. And following sleepy Joe’s train to wherever. What a difference from past – But we will win anyway!!!”. Tweeted Donald Trump. He looked furious again and not to mention how desperate Mr. Donald Trump is to get reelected?

Meanwhile, the UAE Princess Hend bint Faisal Al-Qasimi also at the same time tweeted: “I refuse to be another puppet goaded or bought out to the terrorists. I stand tall & proud of supporting love, peace, tolerance & kindness. I’ve fought battles I’ve won & lost but I know that I am a stronger woman for doing that. I am not a feminist, I am simply a proud woman”.

Well, both have different positions. One is the current President of the United States. And the other one is a lady, who’s known as UAE Princess Hend bint Faisal Al-Qasimi. Interesting to know both of these two expressed their opinion differently but furious and angry enough.