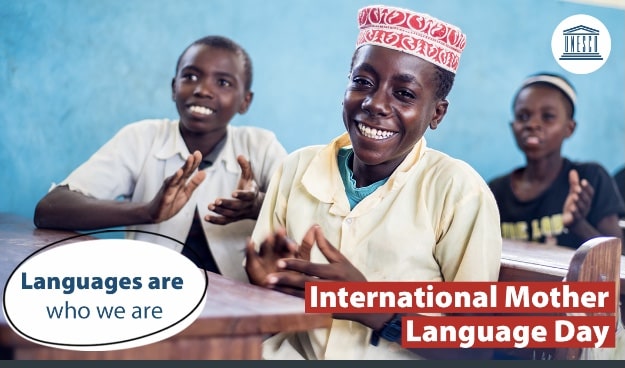 United Nations calls mother language day today Feb 21, 2021. And the UN is in full support of the people to keep speaking freely their own mother tongue. “In many countries, students are taught in a language other than their mother tongue, which compromises their ability to learn effectively”. The UN (United Nations) tweeted. While it’s good that the UN is supporting mother languages, there’s a rising threat in India for mother tongues. However, the UN expressed their feelings through a picture depicting African children cherished.

We learned from this view of the UN to know more about mother languages tackled in India. Indians speak a variety of languages in different states too.

The Telangana State people also speak Urdu, Telugu, and Hindi as their mother languages. So, the point here is every State in India has multiple mother languages. And moreover, Urdu is also largely spoken language in India but it’s not in the curriculum or the syllabus for students across India. Moreover, Urdu is a sweet language, which is known to promote best poetry having history of many well-known Urdu poets. The poets like Mirza Ghalib, and today’s Gulzar given the society to learn a lot from.

The poetry of Mirza Ghalib and Iqbal also remembered only through social media. Officially, Urdu is no more in school studies in India. And has been given no importance. Certainly, Urdu is finishing from India.

And if not given due respect then Urdu will be no more in India after some time. Fascism has increased in India a lot more since few years and it was learned that Urdu has been taken off from many schools. The politics play a different role in India. The politicians keep an eye to divide people and never highlight the culture of other religions than what religion pleases them. India also lost Sanskrit but not because leaders made this happen. But the people stopped speaking as there was scarcity of Sanskrit teachers since a longtime. This is so because Sanskrit has its own drawbacks as a tough to speak language and more.

The reason here to highlight Urdu only is because of the huge number of people used to speak and write Urdu in India. Now, we find only the speakers of Urdu and that too very few. However, in Bollywood movies, Urdu Books or Urdu Novels used in majority of movies. And the actors also learn Urdu for their better performances. When I was in my school my teacher, who was a Hindu asked me to teach him Urdu. He was an English teacher and loved Urdu a lot.

And later I learned that not only Muslims in India but Non Muslims too like Urdu language. However, Urdu has been not highlighted in India as many States highlight their most spoken languages. In Hyderabad, and in many Cities across India, people used to write Urdu poetry and have lot of fun. They organize Urdu poetry events too.

In Tamil Nadu, Tamil is given special status while in Telangana State, Telugu, in Kerala, Malayalam and so on. But, unfortunately, Urdu has no special status in any State or City in India. However, the beauty of the language needs to be learned. And the mother tongue of many Muslims in India has been pushed back. The problem is no private English medium school in India has Urdu as second or third language status. Beautiful languages needs to be taught in schools. I’m not saying Urdu is the only beautiful language, but there are plenty of languages through out the World, which were ignored.

English is the best communication language to communicate with people of different culture. However, mother tongues needs to be highlighted and never should be wiped off. If this is not serious post then you’ll know after some years that there will be no more Urdu in India. Hope this might not happen. But, let’s wait and see what’s the future of Urdu in India, and importantly raise a voice or two in support of this poetic language.