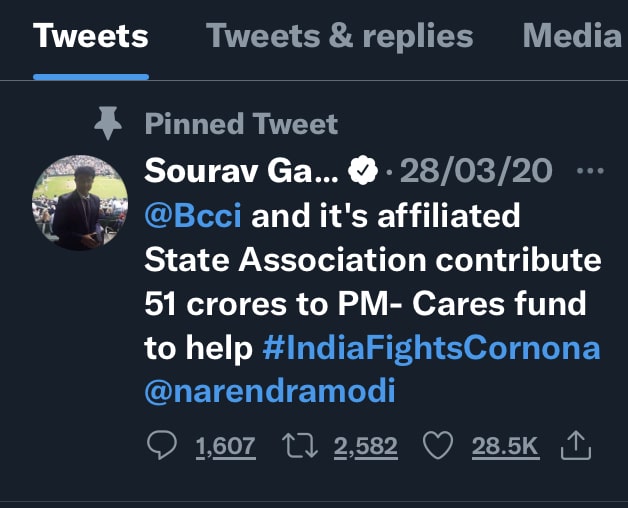 PM Care fund will never be disclosed, where it was used during Coronavirus or Covid-19. The hype generated by actor Akshay Kumar, and few Bollywood Khans also donated, but that’s the past. Now, people asking why my dear ones left us even after donating huge hard earned money to PM cares. Sourav Ganguly is quite different from others. He kept his tweet pinned to let people know how much huge money BCCI donated for a lost cause. Sourav Ganguly reminding PM Care in a way no one could ignore. The way he kept the donation of 51 crores to PM Care fund speaks something, which people, who donated should be aware of.

Sourav Ganguly is the former cricket captain of India, and BCCI’s Chief manager (President of BCCI). BCCI is Board of Control for Cricket in India. He knows that he’s actually mocking people about how much money BCCI donated to PM Cares. It’s not huge money for the cash rich cricket board of India. But the amount of 51 Crores adds more momentum to the donations, where almost everyone including Muslims, who suffered a lot under BJP, donated in large and small transactions.

No account of Twitter kept the money donated to PM Care fund as a pinned tweet. Interestingly, Sourav Ganguly reminding PM that BCCI donated 51 Crores, which’s not utilized to wipe out the crises. Remember, the amount of money donated to PM Care fund would be most likely about tens of thousands of crores. This is how, Ganguly, a great former cricketer keeps showing people that BCCI donated 51 Crores, which is huge money in terms of mass donation.

The mass donation includes rich and poor Indians, where they’ll never be given the calculation of the funds utilized where and how. This is how people exposed PM Care fund was a fraud. This keeps Sourav Ganguly reminding PM Care in a lighter vein. The funds raised on the name of controlling the pandemic went to BJP’s account to fight as much as spending huge money if possible for upcoming elections. PM Care Fund wasn’t used for a good cause, but it’s more likely in the bank account of the PM care taker. The taker fooled the people. Funds used not. Funds are in the pocket. Huge money taken up as a scam, which experts believe. Nowhere, the PM Care was and will be used. Let’s see.

How We Report Posts Like Sourav Ganguly Reminds PM…, Etc.